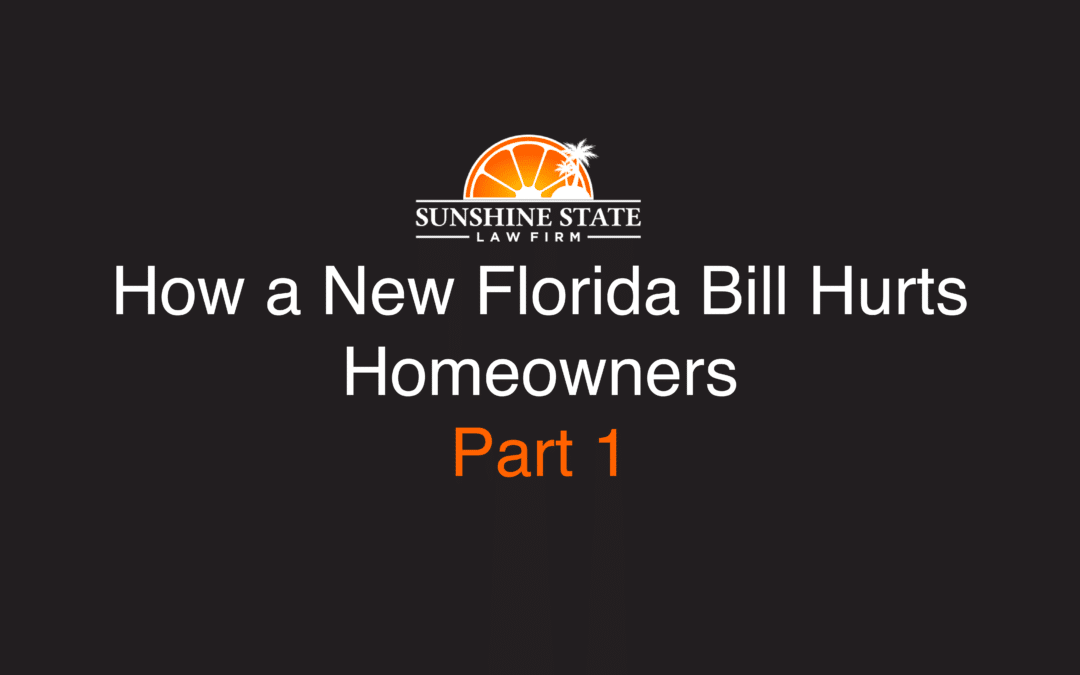 Has your insurance company denied your roof claim? There are new Florida Statutes that may affect how your insurance claim attorney can handle your case. If you have suffered wind damage or hail damage to your roof, let an experienced Sunshine State Law Firm property damage attorney review your case. Our office is well versed in the current and new laws affecting your property insurance disputes.

The newest law affecting your homeowner’s insurance claim is Senate Bill 76. The Florida Legislature passed Senate Bill 76 on the last date of the legislative session this year. Senate Bill 76 went into effect on July 1, 2021.

Senate Bill 76 contains multiple changes that will affect your roof insurance claim. While the final version of the bill was not as harmful as the original, there are substantive changes to the way homeowner’s insurance claims work which have a direct impact on homeowners and their claims. All Florida homeowners should read up on the changes to know how your state legislators and insurance companies have reduced your insurance coverages.

Under current Florida law, homeowners have up to three years to make a hurricane or weather claim from the “date of loss”. The date of loss is whatever day the hurricane or other weather event occurred.

Now, some[1] might say that three years is too long, and people should know whether they have damage or not within that time. However, think about this, how often do homeowners get on their roof to check for damages, and do most homeowners know what to look for? Unless the homeowner is a roofer or involved in roofing claims, most people do not know the difference between hail hits and blisters, or wind creased shingles and normal wear and tear. In fact, most insurance adjusters don’t know the difference.

So how do most homeowners find out they have storm damage to their roof? Usually one of two ways; either the homeowner starts to notice staining on their ceiling leading them to call out a roofer, or someone gets on the homeowner’s roof and tells them.

I think everyone can agree that if the roof has a small leak, it will certainly take some time to present itself on a ceiling. Now, what if instead of dripping down onto your ceiling sheetrock, the leak is dripping down into the wall cavity; how long do you think it would take to notice that leak? Under current Florida law, if you don’t find that leak for 3 years from the date of the weather event, your claim is barred. That means you as the homeowner could be on the hook for thousands of dollars in repairs without any assistance from your insurance company who has happily collected your premiums for years.

On April 30, 2021, your state legislators decided that three years for a weather claim is just too long when they passed Senate Bill 76. As of July 1, 2021, homeowners in Florida will only have two years to make ANY homeowners insurance claim, not just weather claims. So that small leak in your hot water heater that creates mold in a space you never see until you replace the hot water heater…better find that leak in two years. The leaking window that you don’t know is letting water into the wall space…better find it in two years. On and on it goes.

The changes in Senate Bill 76 do not benefit homeowners in Florida. The only group that benefits from this change is the Florida insurance companies. They used their money and their lobbying power to push the state legislators into approving this bill. In fact, the main sponsor of the bill in the State Senate is himself, an insurance agent. Seems a little self-serving right?

Now you might be thinking, “well our rates have been going crazy, this will help reduce them, right?” That was the exact argument that the sponsor of Senate Bill 76 put forward but unfortunately, insurance rates don’t go down, the insurance companies are businesses who have to make money to pay their board their bonuses, and guess who gets to fund that…that’s right it’s you, the homeowner. Insurance companies make money by collecting premiums and not paying out claims.

If I sound cynical, think about this, multiple members of the legislature tried to add on amendments to Senate Bill 76 which would require the insurance companies to reduce their rates since they were reducing their coverages…unsurprisingly, these amendments were resoundingly rejected. In fact, on the last day of the session when the full Senate and full House were debating Senate Bill 76, one member proposed an amendment that would require a rate freeze from July 1, 2021, to December 2022 to assess the impact of Senate Bill 76. Pause rates so we can see if these changes actually do what they are supposed to do, sounds good, right? Not to the majority of the State Senate who voted against this amendment. In fact, the sponsors of Senate Bill 76 were some of the strongest advocates against requiring rate reductions even though when promoting Senate Bill 76, they loudly claimed to anyone who would listen that the bill would reduce rates.

So, the state legislature passed a bill that negatively affects homeowners in Florida under the guise that it would reduce homeowners’ insurance rates without requiring any rate reductions or protections for homeowners. Expect to see continued rate increases and continued denials of legitimate claims.

Please be proactive; have your roof inspected, make sure that your windows are properly sealed and water-resistant, and make sure your homeowners’ policy is updated and includes all the coverage you need to protect you and your family.

[1] By “some” I mean the Insurance Companies and their bought and paid-for state legislators.