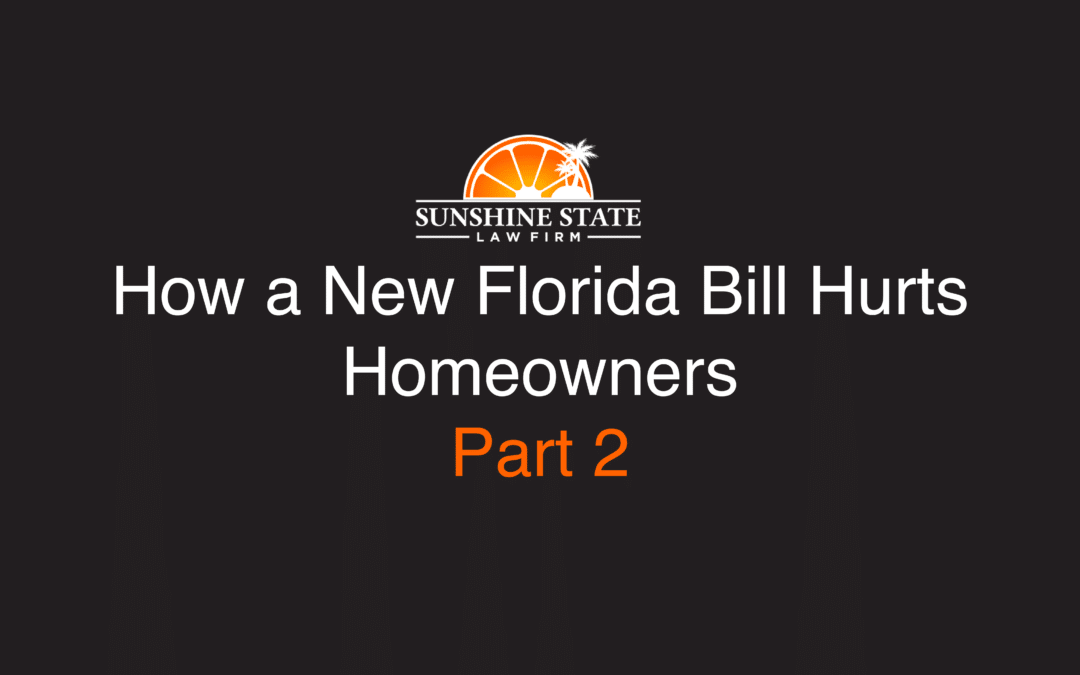 Has your insurance company denied your roof claim? There are new Florida Statutes that may affect how your insurance claim attorney can handle your case. If you have suffered wind damage or hail damage to your roof, let an experienced Sunshine State Law Firm property damage attorney review your case. Our office is well versed in the current and new laws affecting your property insurance disputes.

The newest law affecting your homeowner’s insurance claim is Senate Bill 76. The Florida Legislature passed Senate Bill 76 on the last date of the legislative session this year. Senate Bill 76 went into effect on July 1, 2021.

Not surprisingly, this requirement has been a thorn in the insurance companies’ collective sides for years. If you are involved in the homeowner’s insurance claims business, you have undoubtedly heard complaints about “one-way” fee statutes and allegations that attorneys file frivolous lawsuits against insurance companies to collect attorneys’ fees.

Unfortunately, on July 1, 2021, the traditional way of handling these lawsuits is no more. As of July 1, 2021, the Florida legislature has added a provision that makes it mandatory to send a pre-suit demand to the insurance company, on a document prepared by the Office of Insurance Regulation, at least 10 business days before filing a lawsuit. Your insurance company will then have 10 business days to respond to the pre-suit demand. They can either maintain the denial of the claim, admit the existence of damage, make a settlement offer, request mediation, or request appraisal.

This pre-suit demand provision is designed to keep these disputes from ending up in the court system but in all likelihood, it will only result in increased litigation over what is a proper demand. Unfortunately for homeowners, if the lawsuit isn’t filed, the homeowners do not get the benefit of the attorney fee statute and the only way attorneys’ get paid is by taking a percentage of the benefits. Even when a case ends up in the court system, there are restrictions on the attorneys’ ability to collect their fees from the insurance company based on the percentage of the benefits recovered on behalf of the homeowner.

Now you might be thinking, “well our rates have been going crazy, this will help reduce them, right?” That was the exact argument that the sponsor of Senate Bill 76 put forward but unfortunately, insurance rates don’t go down, the insurance companies are businesses who have to make money to pay their board their bonuses, and guess who gets to fund that…that’s right it’s you, the homeowner. Insurance companies make money by collecting premiums and not paying out claims.

If I sound cynical, think about this, multiple members of the legislature tried to add on amendments to Senate Bill 76 which would require the insurance companies to reduce their rates since they were reducing their coverages…unsurprisingly, these amendments were resoundingly rejected. In fact, on the last day of the session when the full Senate and full House were debating Senate Bill 76, one member proposed an amendment that would require a rate freeze from July 1, 2021, to December 2022 to assess the impact of Senate Bill 76. Pause rates so we can see if these changes actually do what they are supposed to do, sounds good, right? Not to the majority of the State Senate who voted against this amendment. In fact, the sponsors of Senate Bill 76 were some of the strongest advocates against requiring rate reductions even though when promoting Senate Bill 76, they loudly claimed to anyone who would listen that the bill would reduce rates. In fact, the main sponsor of the bill in the State Senate is, himself, an insurance agent. Seems a little self-serving right?

So, the state legislature passed a bill that negatively affects homeowners in Florida under the guise that it would reduce homeowners’ insurance rates without requiring any rate reductions or protections for homeowners. Expect to see continued rate increases and continued denials of legitimate claims.

Please be proactive; have your roof inspected, make sure that your windows are properly sealed and water-resistant, and make sure your homeowners’ policy is updated and includes all the coverage you need to protect you and your family.